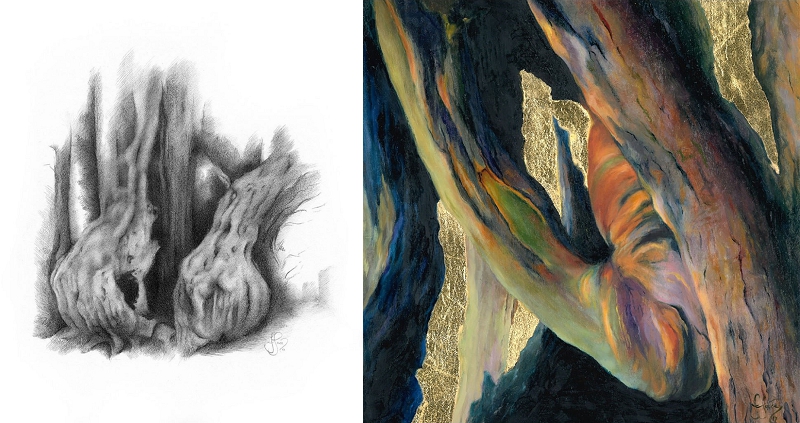 The Yew Tree is one of our oldest living plant species, with the churchyards of Wales and the south west hosting some of the most magnificent examples to be found anywhere in the UK. Some are reckoned to be over 3,000 years of age, and unquestionably predating the ancient buildings that share their sacred sites. It is partly due to their amazing capacity to regenerate that makes it impossible to determine their exact age.  This factor, along with their highly toxic foliage and bright red berries has earned them their symbolic reputation as ‘the tree of death and resurrection’.  In fact it’s lethal effects on farming livestock through the generations has resulted in the species seldom to be found in the vicinity of any grazing pastureland.

It was whilst studying a number of ancient trees in the region that I came across an amazing specimen near Ross-on-Wye.  With a girth spanning over 9 metres, it is one of the largest and oldest in the country.  (see my carbon pencil study above left).
Now I am aware that ageing yews also have the capacity to suspend their growth.  They can become dormant for decades during times of drought and hardship, eventually emerging to life from deep within their hollow frame.  But I wasn’t prepared for such a striking example of this phenomenon flourishing right here in the region.  Particularly striking, the contrasting blackened interior of the hollow bole set against its sun bleached exterior.  Then the most dynamic, multi-toned sapling emerging confidently from within its ageing hulk.  I later learned that this magnificent tree had suffered an appalling arson attack some years ago which left the interior of the tree charred and damaged.  As I set about drawing this living icon,   I could well appreciate why so often early church missionaries chose to build their places of worship alongside them, the symbolic representation of the gospel message truly inspirational.
I have entitled my oil painting study, (see above right), ‘Power made Perfect in Weakness’. It depicts a detail of the regenerated yew’s unfolding branch setting a striking pose, as if rejoicing in victory!
Jenny Joice
info@jennyjoice.co.uk
www.jennyjoice.co.uk 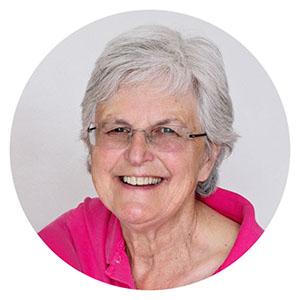